Some drugs can result in decreased levels of certain micronutrients in the body [1]. This drug-induced nutrient depletion may result in secondary symptoms or impede healing. Statins are one such drug…

Every year, approximately 1.5 million people on statin therapy are likely to develop muscle-related complications directly related to statin use [2]. These muscle side effects range from mild myalgia (muscle pain) through to severe life-threatening rhabdomyolysis (breakdown of damaged muscle tissue which may lead to kidney failure).

If you are suffering with muscle pain your symptoms may be a result of, or exacerbated by, your statin medication.

Statins work by inhibiting an enzyme called HMG-CoA. When you block that enzyme you also block the production of CoQ10. CoQ10 is a vitamin like substance found in every cell in the body and serves to produce energy and acts as an antioxidant.

Reduction of CoQ10 levels is well described in people with statins. Marcoff and Thompson, in their systematic review on the role of CoQ10 in statin associated myopathy, stated that trials have demonstrated reduced plasma and serum CoQ10 levels by 16-54% [2].

Depletion of intramuscular CoQ10 has also been demonstrated in mitochondrial myopathies (muscle disease) [1].

If you are on a statin start to incorporate foods higher 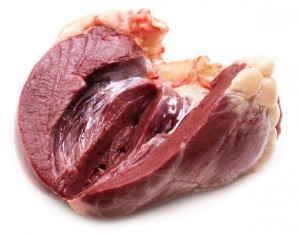 in CoQ10. Heart is the best food source of CoQ10, with pork heart and beef heart topping the list at approximately 127 mcg/g and 113 mcg/g, respectively. See this list for more details. If heart really isn’t your cup of tea try supplementing 100-200mg of Co-Q10, twice a day, with a fatty meal. I recommend Doctors Best Ubiquinol which you can buy from amazon.

Note: Although Co-Q10 supplementation has been found to be extremely safe [4] it may affect bleeding rates in patients taking antiplatelet drugs or on warfarin, it may have an anti-hypertension effect when given with anti-hypertension drugs or it may lower insulin requirements for diabetic patients [4]. So if any of these apply consult with your doctor first.

Other studies have also demonstrated a potential role of Vitamin D for prevention and treatment of statin associated myopathy [1]. It’s therefore a good idea to have your vitamin D levels checked and then dose according. We recommend Now Foods vitamin D / K2 spray available from amazon.

Have you tried supplementing with CoQ10 or Vitamin D? Let us know in the comment section below.

This post was written by Steffen Toates. Steffen is a chiropractor at Dynamic Health Chiropractic in Jersey CI. For more information about Steffen click here.