Stomach gripping (or clinically known as ‘the hourglass syndrome’) is a common dysfunction which can be an underlying factor in many pain syndromes. It occurs due to too much tension in the upper abdominals and dysfunction of the diaphragm (the muscle that sits under your lungs).

The diaphragm: more than just a breathing muscle

You can think about the diaphragm like an umbrella that sits under the lungs at the bottom of the ribcage. Normally the diaphragm will contract towards its outer margins, which are attached to the lower ribcage at the front + sides and to the spine at the back. This pulls the centre of the diaphragm (or the spike in the umbrella) down, inflating the lungs and stabilising the spine.

So you may be wondering what’s the problem? A tight stomach and a narrow waist – doesn’t sound so bad to me! However, this altered pattern of muscle activation can have some far reaching effects. 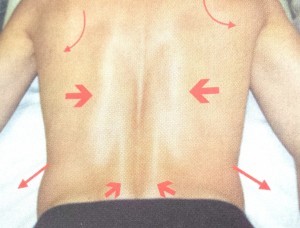 The diaphragm is a key stabiliser of the low back, so when it isn’t working correctly the low back is left vulnerable. This also means other muscles have to work harder to compensate for dysfunction of the diaphragm, specifically the extensors of the lowback. In the picture opposite you can see the extensive ‘sausaging’ of extensors (thick red arrows) as these muscles work overtime in an attempt to support this patients back as he lifts his head. Ideally we would see more balanced activity of these muscles and less ‘sausaging’. This constant overworking of these muscles can lead to continual tightness and pain. 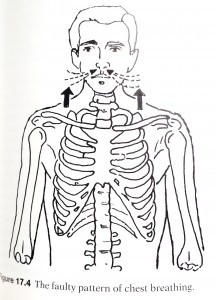 If the diaphragm doesn’t descend properly not only will stabilisation be affected but also breathing. This can place a large strain on the neck. As described above, the centre of the diaphragm should descend downwards expanding the abdomen (belly breath) and inflating the lungs. In the hourglass syndrome this normal pattern of motion doesn’t occur and, in most cases, when breathing in, the chest and shoulders elevate instead to compensate. This puts a lot of stress on the muscles of the neck and is a common factor in headaches and neck pain.

Along with its breathing and stabilising roles, the diaphragm also functions as a sphincter – helping to prevent the stomach contents traveling back up into the oesophagus. It has recently been found that people with GERD (gastro-esophageal reflux disease) have decreased diaphragmatic function and improving diaphragm function may have a role in GERD treatment [1] [2]

There are 3 main causes to why this hourglass syndrome occurs:

Everybody wants a flat stomach but actively holding the stomach tends to lead to an unbalanced activation of the stomach (with the upper section working much too hard). If this is done for prolonged periods this your brain can  ‘rewire’ from your normal pattern of stabilisation to this altered version. A bit like a virus corrupting a computer program.

Sometimes the ‘program’ of muscle activation isn’t quite right from the start. This is thought to be the case in around 30% of babies [3]. Abdominal gripping is a common compensation strategy that babies may develop as a result and which can persist into adulthood. Click here to read more on this topic.

Stomach gripping can develop as part of muscle guarding with a painful injury and may remain long after the pain has disappeared. “After an injury tissues heal, but muscles learn. They readily develop habits of guarding that outlast the injury.” Janet Travell, M.D. White House Physician for John F Kennedy.

What you can do

The first step is to learn to relax your upper abdominal muscles. This can be very difficult initially in seated a standing positions, especially if you have been doing it for a long period of time. 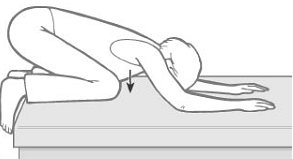 The position on all fours (shown opposite) is usually a good place to start. Adopt this position and relax the stomach. Think about dropping your stomach to the floor. Next, take a relaxed breath in, expanding the stomach and sides of your ribs. You should feel you stomach move into your thighs but you shouldn’t feel the shoulders lifting. Breathe out, again focus on relaxing the stomach. Repeat this breathing cycle for 3-5 minutes 3-5 times per day.   Once mastered you can integrate this pattern into your daily postures and movements – sitting, driving, standing, and walking before progressing to more advanced exercises.

Are you an abdominal gripper? Do you suffer with neck pain, back pain or GERD? Let us know in the comments section below.

68 Responses to Are you Stomach Gripping?